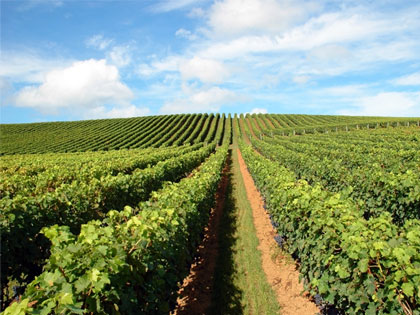 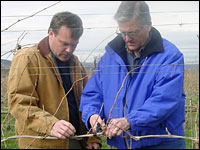 It may not have the same cache as Napa Valley, but in Walla Walla, Wash., in the far southeast corner of the state, many winemakers produce lovely wines. But you won't find many chateaus here; most winemakers are too busy trying to make ends meet.

To call Stephenson Cellars a modest operation doesn't begin to describe the concrete slab at a former Air Force base barber shop on Avenue B. Dave Stephenson's winery has the feeling of a backyard operation: no high-tech equipment, no gleaming stainless steel. But make no mistake. Stephenson Cellars' wine is good, very good. The 2003 Syrah, for example, was recently given a score of 94 by The Wine Enthusiast.

But Stephenson says that making money isn't easy and his goal for the moment is to at least break even on winery operations.

Walla Walla winemakers pride themselves on high-quality grapes with intense flavors. But that intensity means fewer vines per acre. So the grapes carry a premium price — as much as $4 worth in a single bottle of Stephenson's wine. Add in the cost of the oak barrels used for aging the wine — then add in the corks, labels, glass bottles and everything else — and it costs Stephenson about $14 to make a single bottle. A wholesale distributor pays him about $16. Stephenson's profit on that bottle: two bucks.

That same bottle will retail for about $32 and cost $60 or more in a restaurant.

But if the winemaker can sell the wine on his own without going through a distributor, he gets the full $32. The key to doing that is to build up a reputation and a large mailing list of potential buyers. But Stephenson isn't quite there yet. As a result, he says, his profit from the winery last year was about $10,000.

But Stephenson loves what he does and wouldn't change careers for anything. And as he lifts a glass to sample some his best, his exhilaration shows in an exuberant smile.